From the point of view of the key characteristics of the GeForce RTX 3050 based on the GA106 and GA107 GPUs, they are no different, except for a slightly lower consumption (minus 15 W) in the second case, but there can be much more differences in real products. A recent example of this is the new Colorful RTX 3050 Ultra W DUO OC V2 graphics card.

As well demonstrated in the table, in addition to the lower consumption of the Colorful RTX 3050 Ultra W DUO OC V2, compared to the previously released version of the Ultra W DUO OC on the GA106, a six-pin rather than an eight-pin power connector and a simpler power subsystem – it “lost” one phase going to the GPU. But perhaps the main difference is in the ports: the GA107 version has one HDMI, one DisplayPort and one DVI output set, while the GA106 version has three DisplayPort and one HDMI. 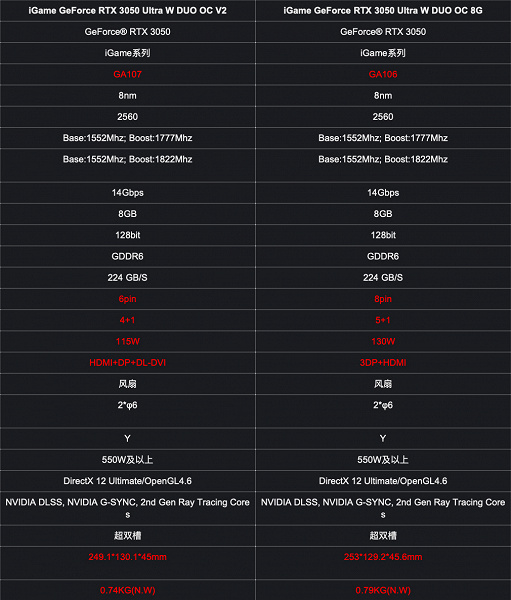 All this suggests that when choosing a GeForce RTX 3050, you need to look not only at the basic characteristics of the GPU, but also pay attention at least to the set of video outputs and the power subsystem.