Certification confirms the use of an overclocked processor

The Samsung Galaxy S23 Ultra is one step closer to release as the phone has been certified by the Chinese regulator TENAA. A list of key characteristics is immediately given, in which the list of sensors of the main camera attracts attention

The fact that the device will receive a 200-megapixel sensor is expected. Like other sensors with a resolution of 12 megapixels. But the presence of another sensor with a resolution of 108 megapixels is something new. There are two options here: either Samsung will be able to surprise very much by releasing the world’s first smartphone with both 200-megapixel and 108-megapixel sensors, or TENAA made a mistake by increasing the resolution of the second sensor by 10 times. A well-known insider Ice Universe has already spoken on this topic: he said that 108 megapixels is a mistake, in fact it should be 10 megapixels. 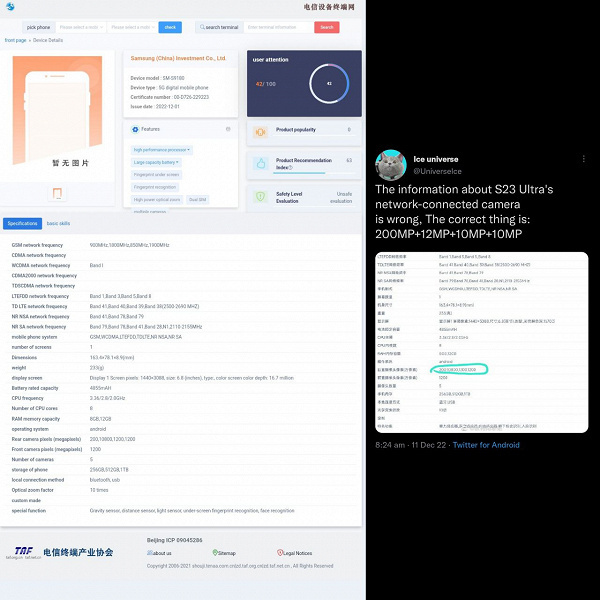 The second important point following from the list of parameters: the Galaxy S23 Ultra will indeed receive an overclocked version of the Snapdragon 8 Gen 2 with an Arm Cortex-X3 super-core running at an increased frequency of up to 3.36 GHz.

Smartphone sales in China have fallen to a 10-year low.

All differences between Samsung Galaxy S23 Series are listed